Maps of the Imagination

The Writer as Cartographer

Turchi posits the idea that maps help people understand where they are in the world in the same way that literature, whether realistic or experimental, attempts to explain human realities

In Maps of the Imagination, Peter Turchi posits the idea that maps help people understand where they are in the world in the same way that literature, whether realistic or experimental, attempts to explain human realities. The author explores how writers and cartographers use many of the same devices for ...

In Maps of the Imagination, Peter Turchi posits the idea that maps help people understand where they are in the world in the same way that literature, whether realistic or experimental, attempts to explain human realities. The author explores how writers and cartographers use many of the same devices for plotting and executing their work, making crucial decisions about what to include and what to leave out, in order to get from here to there, without excess baggage or a confusing surplus of information. Turchi traces the history of maps, from their initial decorative and religious purposes to their later instructional applications. He describes how maps rely on projections in order to portray a three-dimensional world on the two-dimensional flat surface of paper, which he then relates to what writers do in projecting a literary work from the imagination onto the page.

Peter Turchi has written and coedited several books on writing fiction, including Maps of the Imagination: The Writer as Cartographer, A Muse and a Maze: Writing as Puzzle, Mystery, and Magic, A Kite in the Wind: Fiction Writers on Their Craft, and (Don't) Stop Me if You've Heard This Before and Other Essays on Writing Fiction. His stories have appeared in Ploughshares, Story, the Alaska Quarterly Review, Puerto del Sol, and the Colorado Review, among other journals. He has received numerous accolades, including fellowships from the National Endowment for the Arts and the John Simon Guggenheim Memorial Foundation. He is a professor of creative writing at the University of Houston.

“Readers, after all, love to get lost in a good book. It is a wise writer who will not only deposit them there but lead them out again, whole and thoroughly satisfied.”— ForeWord

“It’s not uncommon to compare the writing of a story to the mapping of a world, but no one has so fully, or so seductively and rewardingly, performed as extended a meditation on this illuminating metaphor as Turchi. . . . Brilliant and pleasurable, Turchi’s musing on our innate need to know where we are, where we might go, and why alters our perceptions of not only maps and fiction but also the nature of the mind’s terra incognita.”— Booklist

“For Turchi, the map is more than metaphor: it is an organizing principle of narrative. Language is like a land, paragraphs are districts, sentences are streets, and words are only lines and curves constructed the way maps are made of lines and shapes. Letters are like wild canyons and chaotic seas that the writer maps into words and then into sentences and then into scenes.”— The New Yorker

“I wish I had written Maps of the Imagination.”— Rebecca Solnit

“A gorgeous book in every way… engaging, intelligent, and never jargon laden; this book wears its vast learning lightly.”— CHOICE

“A book that cries to be read more than once.”— Greensboro News & Record

“Maps of the Imagination ranges widely across a many disciplines and art forms, from mathematics and formal geometry to Marx Brothers movies and the works of such writers as Borges and Calvino. Sometimes with off-the-cuff analogies, sometimes with pages of analysis, Turchi charts a lively course through a labyrinthine field of varying ways of looking at the world and, most important, the blank page.”— Publishers Weekly

“[Turchi’s] study of maps has inspired writers, artists, and designers for more than a decade, about what maps can teach us when it comes to the creative process.”— Fast Company

“A treasure map for discovering secrets of the writer's life.”— The Charlotte Observer

“Maps of the Imagination should inspire both reader and writer as well as those of us who look at a map and immediately begin to dream of journeys not yet taken.”— The St. Petersburg Times

“A genre-defying gem that straddles art book, writer’s manual and cultural critique in an utterly captivating way that makes you look at both old maps and familiar fiction with new eyes.”— Brain Pickings 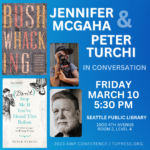